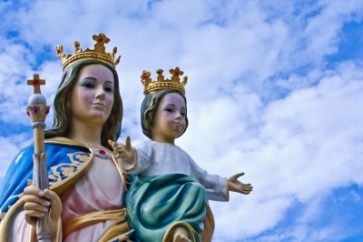 Image courtesy of sritangphoto at FreeDigitalPhotos.net

There are many reasons why the Catholic Church is not the best when it comes to women’s rights. I’ve definitely hit on the big ones on this blog before: banning women from the priesthood, refusing to acknowledge divorce, and of course fighting constantly against women’s reproductive rights. But there’s another way in which the Catholic Church is pretty darn sexist, and it’s less about a position on a major political issue than it is about the church’s overall view of women and the language many of its adherents use to describe us.

A point I often heard growing up in the conservative Catholic homeschooling community was that women were special. That we were a beautiful, wonderful part of God’s creation. I can get behind that sentiment minus the whole God thing–until they would give their favorite example of why women are so special: they can create life. Don’t get me wrong, the whole babies thing is cool, and it is part of what makes me female, but this is often used as the only point to support this idea that women are beloved by God, and when one combines it with the things women are forbidden from doing by the Catholic church, keeping us from holding the top leadership roles in the church and controlling us on matters of reproduction, it’s easy to see why a woman might come to the conclusion that we’re only valuable as vessels for human life, not as individual human beings ourselves.

This idea wasn’t just spoken by the homeschooling families around me. It abounded in our educational materials, especially the religious ones. In a lecture that was part of a tangential talk on a Bible Study DVD, the speaker expressed this idea in the context of the Adam and Eve story: (I’m paraphrasing from memory here.)

“The woman is God’s most complex, beautiful creation. She can create life. Think about how incredible that is. I’m a guy. I can’t do that! You know, God created women after man like she’s a second draft. Like how your new phone can do more than your old phone. She’s so much better.”

On the surface, this sounds totally benign and kind of pleasant. I loved the particular lecture this one came from at the time. But it’s doing it again–placing women’s value in their uteri, in their reproductive organs. And talking this way, describing women as the second draft after men, makes it seem like our reproductive abilities are a new feature like a front facing camera or something. They’re not. Our reproductive organs are just a fact of our existence just like men’s reproductive organs are. I don’t see Catholics praising men for their magical baby-making semen (though if you have, let me know in the comments.)

Talking about women this way does a few things

Women have fought for a long time to be able to vote, to enter the workforce, to have equal access to education, and to have control over reproduction so that we can choose the life we want to live. Perpetuating this idea marginalizes us.

Furthermore, in Catholicism, this idea is often further perpetuated by the myth of the virgin Mary, who is celebrated for her “yes” to God, agreeing to be a mother to Jesus. She is held up as the ideal woman: the perfect example of how Christian woman should live, because she agreed to carry a baby to term. She is the Catholic mascot for “siding with God” on matters of reproductive rights. If it’s good enough for Mary, it should be good enough for the rest of us, right? But Mary is just the teacher’s pet. She’s the student whose A+ ruined the curve for everyone else. She’s a fictional character. She doesn’t represent all women. Even if we knew her to have definitely existed, she’d only be one person in one time period with one set of experiences.

I realize that the example of the talk that brought up this idea came completely from my own memory. To supplement that, here’s a Catholic Answers page straight from the horse’s mouth in which a Catholic describes Catholic teaching on men and women. Notice how the primary difference they list is that women “give physical life” and men “give spiritual life” (the priesthood. An arbitrary rule they impose.) Furthermore, as I mentioned was their tendency earlier, they also bring up Mary who, let’s face it, is revered more for her ovaries than anything else.

Have any of you encountered this idea that women are special because of their reproductive abilities in your own church communities, former or current, (regardless of denomination)? What are your thoughts on this? Feel free to leave a comment. All opinions are welcome. Just be respectful to others and think things through before posting.

One night a few weeks ago, my dad came home from work late, as he often does, and strode up to my mother. “Smell my forehead. Smell anything?”

My mother sniffed. “No. Should I?”

“I’ve been blessed by a special oil,” he said. Apparently a priest from the church he attends on work days found out about a statue of Mary–Jesus’ supposedly virgin mother–that supposedly is miraculously leaking oil, but sometimes also blood and tears. The oil is blessed, the priest said, and the priest acquired some from the statue, which resides at a church in a neighboring state, for the purpose of blessing people. Yes. He is claiming that a statue is literally leaking magic oil.

Curious, I did some online research. I’d heard claims of statue-related miracles before, but this was the first time I’d heard of one crying. I couldn’t find anything that was definitely the same one my dad supposedly was blessed by, but look how many people really believe this shit! This blog post, for example, is absolutely nuts. A Mary statue exuding pearls and glitter? This quote is my favorite part:

We spent a couple hours in prayer, veneration and meditation before the healing service would begin that evening. During that time, we spoke with some lovely Christian ladies who had brought scotch tape. With it, we clumsily lifted a variety of colorful escarchas (a mysterious Gift of holy glitter) off our pews. It seemed, the more we lifted it, the more escarchas appeared.

It’s as if the writer never used glitter for art projects when he or she was a kid. Glitter gets everywhere. Seriously, it’s small, good at falling into crevices, and it sticks to things. I have no doubt that these people discovered glitter on the pews, however, I also have no doubt that said glitter was just the usual craft store type. For crying out loud, it might not even have been placed by anyone on purpose, but rather come off the outfit of a fashionable 8-year-old who attended an earlier mass.

The craziest thing about this weeping Mary statue phenomenon though, by far, is that the Catholic church, which is definitely not the most skeptical organization in the world, has rejected most supposed “crying statue” cases as hoaxes–but not all.

This (fairly long) “documentary,” for lack of a better word, on weeping religious icons, contains a fairly long list of them, some of which have been approved by the Catholic Church. The disclaimer at the beginning of the video reads:

The Magisterium of the Catholic Church makes all authoritative and final decisions regarding any individual or collective claims of personal apparitions of the Blessed Mother. The apparitions and/or lachrymations associated with La Salette, France; Fatima, Portugal; Akita, Japan; Syracuse, Sicily; Cochabama, Bolivia; and Civitavecchia, Italy; have been approved by the Church. Other sites and lachrymations cited in this program have not been formally approved.

What I get out of that is, yes, the Church does do some things to try to weed out the most obvious hoaxes. But as I watched the video, I kept noticing that while they used scientists to test the claims of the faithful about the religious icons, a step I definitely support, the scientists never seemed to be asking the right questions–the ones I, a person who is genuinely skeptical of these claims, would like to have answered. I almost wished they’d consulted Penn and Teller, or some other magician, because my main concern is not even so much that there needs to be a scientific answer to the situation. It’s such a bizarre one that I’m not even sure science is always useful except to maybe test the substance and see if it’s real. Really, my main question is, has a human being tampered with these statues and other icons to make them cry?

It wouldn’t be that difficult to take an icon, put it into a thick frame, and insert some sort of tube with olive oil in it right before the producers of the “documentary” came to view it. And I kept thinking, why blood and oil? Why are so many of these not actual tears? The first answer that comes to mind is that maybe those other substances are more dramatic (in the case of blood) or easier to come by (in the case of oil). It all seems so suspicious to me that I’m a bit disappointed in the people the documentary keeps bringing on to talk about it. Many of them go further than verifying that they believe the icons’ tears are real. They add interpretation to it, claiming that the tears are a sign that the religious figures depicted in the icons are sad, and concerned about some sort of horrible calamity to come. They see them as a “desperate call to holiness,” of course–but literally all they’re seeing are tears coming out of a religious icon. I’ve cried for reasons as silly as not being able to eat cheese when I thought I was lactose intolerant and as serious as being concerned because a loved one was in the hospital. Are these people really suggesting that they can interpret these tears? Because if a stranger told me they knew why I was crying, they’d probably guess wrong.

Also, concerning the ones involving blood, I’d like to see them test all the people who have regular contact with the statue–the priests, altar servers, what have you–and do a DNA test comparing the blood to each of those people. I’d be willing to bet that the blood from the statue belongs to one of them. There’s definitely a strong motive, especially for a pastor of a parish with an aging congregation, to fake a miracle. What better way to increase the number of your churchgoers?

Have any of you encountered miraculous claims? What are your thoughts on these?