I may be in my twenties, but I absolutely love Disney. You may be wondering where that fits into a blog about religion and politics, but trust me–it does.

Disney has shown itself to be fairly progressive. For example, several years ago, the Disney Channel show Good Luck Charlie aired a much anticipated episode featuring a lesbian couple. But sometimes Disney is a bit more subtle, addressing serious adult topics through its much-loved children’s movies in an indirect, even symbolic way.

Take Tangled for example. It’s a song-filled adaptation of the well-known story of Rapunzel.  Like most fairy tales, it has fantastical elements, and it’s definitely intended for children. But I was thinking about the film the other day and realized it can be argued that in some scenes, Rapunzel’s crown stands in as a symbol of her virginity. If that is the case, then her decision to give it to Flynn when she does–prior to marriage, but after they have gotten to know each other fairly well–and the fact that everything works out for them in the end, suggests that despite what Rapunzel’s mother warns her about giving the crown away, premarital sex isn’t always a terrible thing. In a movie about coming of age and making your own decisions despite what your parents are telling you, the inclusion of such a symbol is pretty ballsy of Disney. I say more power to them.

Maybe I just miss taking English classes, but I think this offers a pretty cool way to interpret the scene when Rapunzel gives the crown to Flynn. He’s just done what she wanted:  he’s taken her to see the lanterns for her birthday. Basically, he’s taken her on a really nice date, and they’ve gotten to know each other fairly well throughout the course of the day. He even brings lanterns for them to send floating into the sky in the scene, to participate in the event she’s watched from a distance for years. By doing that, he’s offered her something he didn’t have to give, showing that he actually cares about her. When she gives him the crown she says,

“I should have given it to you before, but I was just scared. And the thing is, I’m not scared anymore. You know what I mean?”

Those words would fit pretty well in a scene with someone having sex for the first time. It takes a lot of courage to trust someone like that, and at this point in the story, Rapunzel finally does. 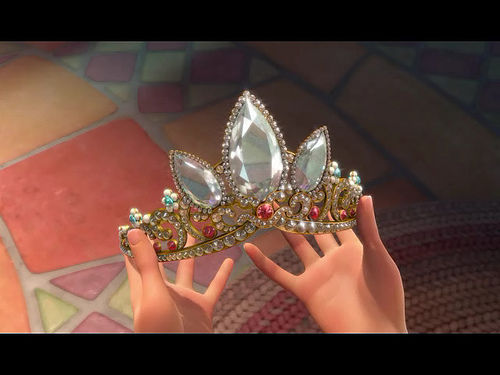 Not convinced that the crown symbolizes Rapunzel’s virginity? It definitely isn’t such a symbol in every part of the film, but it’s safe to say that the symbolism holds for the majority of the story, and I’m not the only one to notice this either. One person’s explanation of the symbolism on Reddit is pretty strong. You can read it most of it below. I’ve inserted some brackets and a link for clarity, as well as some nit-picking on facts, but altogether it’s a pretty strong argument and I’m convinced:

…When Mother [the witch in the original fairytale] sees the crown later and deduces that Flynn is with Rapunzel, it stops being a MacGuffin, but until then it functions as a fairly average one. However the crown is not simply a MacGuffin; it is a symbol for Rapunzel’s virginity.

First, it is important to know that technically Rapunzel has had the crown since birth. After all, as the daughter of the king and queen, the princess’s crown is hers by birthright. It is something that she wholly owns. However, she didn’t always know it was hers because she was kidnapped. She only begins to figure this out later when she goes out into the world and learns more about it and herself. This is not unlike a girl’s virginity. It is something she is born with and that she owns. However, many girls don’t know what it is until they are older and begin to learn about their bodies and the world around them.

Second, consider Mother Gothel’s words to Rapunzel once she finds Rapunzel the first time. Mother Gothel tells Rapunzel that as a mother, she knows that once Rapunzel gives Flynn the crown he will not want to be with her anymore. She says that Flynn doesn’t really like her and that he is only sticking around, waiting for Rapunzel to give him the crown; once he has it, he will leave her. If you replace crown with virginity, you get the same advice that nearly every mother tells her daughter(s). Mothers tend to warn their daughters to save themselves for the one they love and warn them of those that will just use them until they get what they want, i.e. sex.
Third, there is the fact that in the original Grimm version of this story [English major technicality here: the Brothers Grimm collected stories from oral tradition, so the Grimm version is not technically the original, though it may be the earliest written form of the story] Rapunzel does give her prince her virginity, leading to a teen pregnancy. This idea of the crown being a symbol for virginity would make sense since by the end of the film, Rapunzel does end up giving Flynn the crown.
It would also make that scene that much more significant and heartbreaking. In this scene, Rapunzel tells Flynn that she was afraid, but now she wasn’t and then gives him the crown. Then when Rapunzel thinks that Flynn took the crown and left, she is devastated to the point that she willingly goes back home with her manipulative and cruel “mother”. If we equate the crown with Rapunzel’s virginity, then her giving it to Flynn becomes a sexual act: she is giving him her virginity. She is no longer scared because she trusts him. Then when she believes that he has left her, Rapunzel’s devastation is now a product of the real life fear that many girls have: trusting a guy with her virginity and having him basically spit and trample all over that trust. Traumatizing, indeed.

Ultimately it’s impossible to know for sure whether the creators of this film intended for this symbolism to be there unless they say so themselves, and I doubt that they would for a children’s film. Nevertheless, considering what a clear parallel it is, I suspect it was intentional, and I love being able to think that.

There was a bit of conservative recoil from this film from what I recall, mainly because Rapunzel acts like a real teenager and rebels a fair amount, and despite that everything turns out OK for her. As one reviewer puts it,

“…the legitimisation [sic] of the heroine’s rebellion against the authority over her was just too terrible. Our children are rebellious without any encouragement: to see how a rebellion is carried out and ends in glorious joy is very disturbing. The film says not to trust your parents and to despise their claims of love.”

I understand his concern, but by putting in this virginity symbolism and depicting teenage rebellion for what it is, Disney has shown a very real part of growing up:  realizing that your parents, who do what they feel is best to keep you safe, aren’t infallible. Granted, in this movie the parent is actually the villain, but what better way to show that not every parent is right about everything?

When people argue for parents’ rights to control every single aspect of their children’s lives, including education, they often conveniently ignore that some parents are white supremacists who would like to teach their children inaccurate, racist versions of historical events because they think that’s what’s best for their kids, and that other parents don’t believe in modern medicine and would rather have their kids die than receive a life-saving blood transfusion, or disease-preventing vaccination.

In Tangled, for the first time in any kids movie I can think of, a parent was depicted as being wrong about something–or even a lot of somethings. I wish this movie had come out when I was much, much younger. It might have prepared me better for the realization that my own parents, while loving and well-meaning, can be very, very wrong. This film is Disney at its finest, and I applaud them for it.

While we’re on the subject, do you know any other kids movies that contain fairly adult topics? Have you ever re-watched a film you used to love and finally understood half its jokes? Feel free to leave a comment.