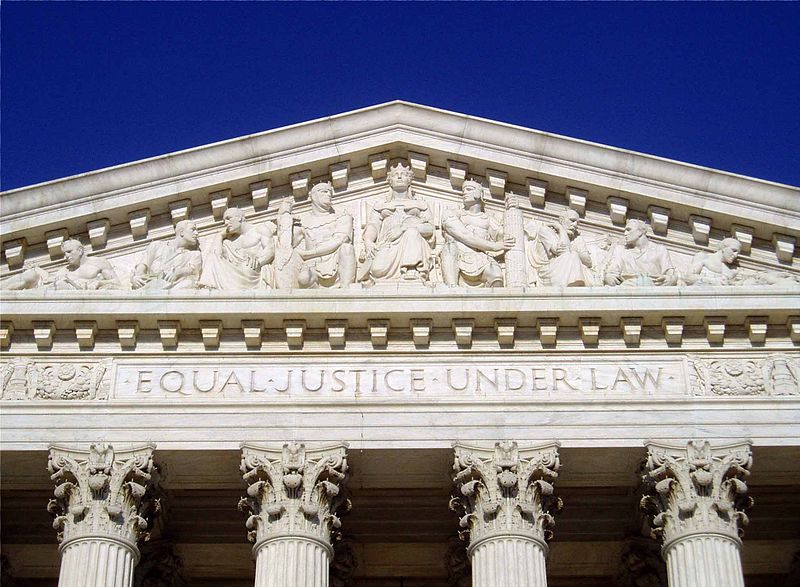 Picture from Wikipedia’s page on the Supreme Court building: https://en.wikipedia.org/wiki/United_States_Supreme_Court_Building

Growing up, I was taught that, and I quote my mother on this:  “Abortion is an unjust law.” She would elaborate, “It [Roe v. Wade] was made in a way that breaks the law. The Supreme Court can’t make laws, but they made one anyway, and now abortion is legal.”

“The Supreme Court can’t make a law; the legislature has to make it, the executive has to sign it and enforce it. The notion that the Supreme Court comes up with a ruling and that automatically subjects the two other branches to following it defies everything there is to equal branches of government.”

The best thing about that statement is that it’s a fairly accurate description of the United States’ branches of government and the system of checks and balances that are in place so that laws can’t just be made willy-nilly. Huckabee seems to think those checks and balances were ignored in Obergefell v. Hodges. But that’s not what the Supreme Court did in this case, nor is it what the Supreme Court ever does.

In Obergefell v. Hodges, like in Roe v. Wade, the Supreme Court did exactly what it’s supposed to do:  it interpreted the constitution. The case wasn’t a question of whether or not there should be a law saying yes to gay marriage. I’m not even sure how that would work. There is still no law saying “gay people must get married.” I’m sure that, as is the case with straight cisgender people, not everybody in the LGBT+ community wants to get married. (Additionally, I’d question the constitutionality of any law requiring any demographic to get married. But I digress.) The case was nothing of the sort. It was about whether or not the constitution allows the country to maintain laws that were already in place:  laws which BANNED same-sex marriage.

It wasn’t a question about a law being made, but rather about whether currently standing laws, which had already been made, were constitutional. The Court convened, they argued, and they concluded that no, those laws were not constitutional. The constitution grants equal protection under the law, and gay marriage bans defied that equal protection. So now those gay marriage bans have been lifted, and the US has achieved legal marriage equality, minus a few rude county clerks in the Bible Belt.

Republicans have been quick to argue that the judges broke the law by making that ruling–but the fact is, they didn’t. If Republicans want to continue to fight against marriage equality, they should be arguing that gay marriage bans are, in fact, constitutional. OR, they should look for secular reasons to ban gay marriage and use those to build an argument toward a constitutional amendment. They’re unlikely to win either way, so they’ve created this ridiculous straw man. My favorite part of this situation is that they clearly understand what the Supreme Court’s job is, yet they simultaneously haven’t been paying attention enough to the details of the actual case to realize that the judges did in fact do their jobs.

I’ve heard some people argue that a state-by-state legalization would have been better for the country. I see what they’re saying, but I don’t think it was necessary. Maybe doing it that way would have avoided this whole ridiculous “They broke the law!” claim by Republicans. However, waiting for the states to decide would have slowed down progress on what is without a doubt a civil rights issue. When there’s injustice going on, it doesn’t make sense to wait for each state to meander towards the right conclusion. At least, that’s how I see it.

I’m not an expert on constitutional law, so if I’m mistaken about anything please do not hesitate to inform me.

Have you encountered this crazy “They broke the law!” argument? What do you think? And would a state-by-state approach have been better, or just slower? Feel free to leave a comment. All opinions are welcome. Just be respectful and think things through before posting.